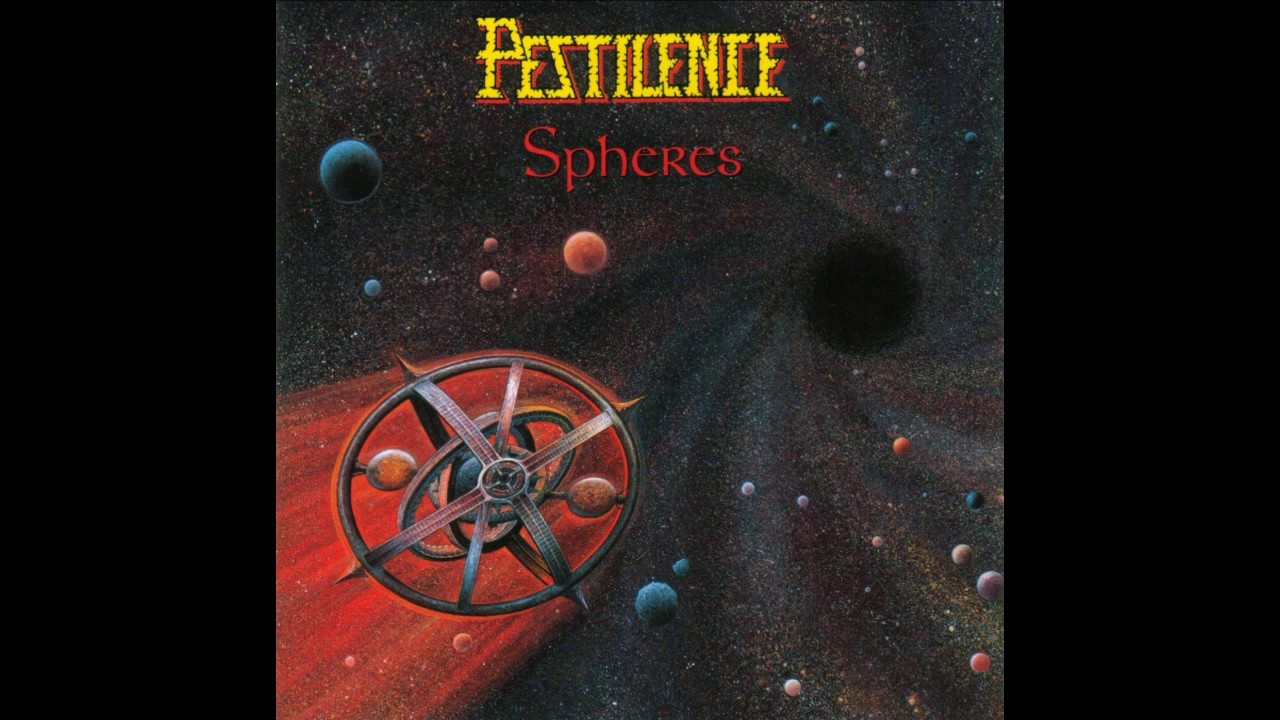 Every song sounds more contrived than the last, and being blunt, they all sound incredibly similar. Incredibly strange passages full of sci-fi effects and unintelligible noises. Vocals killing the mix on over half the album.

Drums sounding the farthest thing from organic. Galloping drums, blitzing guitars, vocals that don't completely murder the musicianship behind them, and commendable bass work to boot. The album's closer, "Electromagnetic", also cruises along with some riffs that sound like some work, however minimal, was put into them. Other than those two instances, you're basically getting an exhibition in the mundane from a band that should have stayed dead long ago, and needs to hang it up ASAP.

Pestilence is a dumpster fire, and so is "Hadeon". If you want to hear a bad ripoff of their earlier work, by all means, listen. This is Volviendo A Ser - Portales - Portales En Vivo only warning.

I'll open with this statement: Pestilence should have called it quits a long, long time ago. Mameli exemplifies the type of musician that Changing Perspectives - Pestilence - Spheres have stopped while he was ahead in the early 90'sand spared himself the endless embarrassment of attempting to push the genre any further than it ever needed to go. Boring riffs despite great productionlack luster songwriting, constantly rotating band members, and shaky legal touring ramifications should have been plenty to stop anyone from continuing on.

If anything, his blind perseverance and stubbornness to create album after album of uninspired "fusion" metal is to be commended. That's just about the only positive here, though. All of the things that made Pestilence great are now absent. Coincidentally, that involves the departure of Patrick Uterwijk on Changing Perspectives - Pestilence - Spheresand Marco Changing Perspectives - Pestilence - Spheres on drums. I don't care what anyone says; Mameli can be the main behind the band, but without the other members, the inspiration is just gone.

It leaves nothing to be remembered, and everything to be confused by. Changing Perspectives - Pestilence - Spheres are the days of catchy, semi-technical hooks. Lyrics Forum Tablatures Links Feedback. Search lyrics archive:. All lyrics are property and copyright of their respective owners and are provided for educational purposes only. Check out that closing riff!

As with the last album, there are some well-placed interlude pieces to break up the main songs. The band also attempts to go full-on fusion with "Personal Energy", which is largely successful and features a startlingly pretty jazz break halfway through. This should have been the album to take Pestilence over the horizon, but sadly it wasn't to be.

The predictable reaction of a lot of the band's fanbase saw to that. So did Pestilence themselves. Mameli had begun to verbalize a lot of admittedly pretentious views regarding extreme metal and its listeners.

I also think it is a real shame that the band effectively caved in to the critics and "gave up", especially when they clearly believed in this album at the time, though I do understand their demoralisation. What's even more unfortunate is that when they re-formed they took the easy way out and tried to ape Consuming to please the crowd with the unremarkable comeback album Resurrection Macabre. Their works since then Changing Perspectives - Pestilence - Spheres consisted of confused sounding, mid paced groove metal punctuated by Mameli's admittedly still brilliant lead guitar work Changing Perspectives - Pestilence - Spheres Thesseling's idiosyncratic bass to keep things interesting.

For me though, Pestilence ends at Spheresand this is an album that will give you endless enjoyment if you are open to it. But you do have to be open to it. So herein lies the problem. On the one hand you have fans, but a style you love Changing Perspectives - Pestilence - Spheres hate. On the other hand you have a style you want to play, but no fans. Bad luck, boy! Unfortunately, he was not able to compose coherent songs that could satisfy his high requirement. The running time Changing Perspectives - Pestilence - Spheres this so called full-length appears to be a first indication of his lack of ideas.

Subtract the three pointless less-than-two-minutes-instrumentals and what remains at the end? Eight miserable songs in even more miserable 29 minutes. At the very first glance onto this album, it did not look like a new beginning but like a declaration of creative bankruptcy. Maybe the Dutch crew wanted to record some disturbing tracks, but was it really meant this nasty way? The longer the album lasts, the worse it gets. Perhaps "Personal Energy" was their attempt to perform a kind of "space ballad".

It gets lost in an unknown ugly galaxy, far away from the bright shining metal universum. Freed from the expectations of stupid metalheads, it flows dreamily into nothingness. I would wish it had not come back. In We Three Kings Of Orient Are - Mario Lanza - Christmas Hymns And Carols, I am unable to appreciate jazz-related solos or musicians that seem Changing Perspectives - Pestilence - Spheres be removed from the real world.

In conclusion, for the band, "Spheres" might have been an act of self-realization. For fans like me, who felt fine while linking the band with death and thrash of the better kind, this output was just an act of betrayal and the following occasionally split of Pestilence was Des Müllers Blumen - Franz Schubert / Julius Patzak / Walter Klien - Julius Patzak Singt Die Schöne reason for sorrow.

Oops, this isn't Voivod, and this isn't Killing Technology. But in many way it reminds me of those wacky Canadians' best album. Strange, jazzy riffs, Changing Perspectives - Pestilence - Spheresquasi techical drums and harsh, shouted vocals all scream Voivod.

Well, that and the strong sci-fi vibe this album has. Spheres is not a comfortable listening experience. I picked this one up before any other Pestilence album, and was utterly confused for a good while. As a Morbid Angel worshipping 15 year old, I think the exact words out of my mouth were "what the fuck is this shit? Patrick Mameli's vocals sound like a transmission from a distant The Boyfriends - Once Upon A Time For all the money they spent on guitar effects hey!

Once again, though, the totally weird sound especially the guitars makes you feel like you're on some sort of flying saucer with little green men.

B-grade sci-fi movies must have been a definite influence at this point. It's quite possible that upon initial listen, you won't remember a thing from this album. That's odd, because there are no really Changing Perspectives - Pestilence - Spheres structures, just weird music. The slower moments stand out the most, especially "Personal Energy," which is actually Changing Perspectives - Pestilence - Spheres. The guitar synth solo in there is breathtaking! The "heavy" stuff is solid, as well, albeit not quite as memorable.

While there is enough of the fret grinding Possessed influenced riffing of Testimony of the Ancients, a greater focus on melody and the aforementioned bizarre production makes this seem Changing Perspectives - Pestilence - Spheres more like a psychedelic mix of thrash and jazz fusion. One thing that I really love about this album is the bass.

Jeroen is all over the place with his slithery fretless bass action, and it's pushed to the front Changing Perspectives - Pestilence - Spheres the mix. At some times, it feels like he's playing an entirely different song.

It is in these sections that the jazz influence becomes totally obvious. There is nothing like Spheres out there, and I don't think there ever should be. You can tell this is Pestilence, but I often have to pinch myself, or ask if I've accidentally eaten some strange fungus during the experience.

Spheres requires a very open mind, previous exposure to and enjoyment of music outside of orthodox metal. If you've got that applies to you, hop on board and take a trip into deep inner space! I remember being in a merry frame of mind when I bought this back inbecause the previous album 'Testimony of the Ancients' had presented me this fantastic, atmospheric death metal band.

The cover promised a lot, continuing in the vein of the precursor, with familiar spheres. I got home and sticked the CD into the player. I had one thought about this when the album was playing: "What the fuck?????!!!!

But for me, it was too much: technical jazzy space metal was their thing now. I never got into the album when it came out, and sold it after a few weeks or months. Roll over a few years, and in the late s, I had the chance to pick it up for a very cheap price, and thought to give it a second chance.

After all, my music collection had expanded from safe styles to something more adventurous. Who knows, 'Spheres' might have left a seed of alteration in my brain, which took effect later, because 'Spheres' sounded partly awesome, partly way too much out there. This is not an easy-listening album. You just don't listen to it in the background. Hmmm, so what's left of the Pestilence of the yore?

There's some great double bass drum work and a few riffs are still death metal in style. But that's it, basically. Sometimes the band go through hazy space prog rock, then they find themselves in a pink fairyland. Then again, there are unexplored black holes with extreme powers, too and they are a majority on this album.

So, it's really not a fluffy ride, mind you. The rhythm guitar tone is obscure, blurry, and it's not heavy at all. The lead guitar work usually goes through guitar synthesizers, which are used a lot. Plus, all the guitar synths no keyboards are used at all on Changing Perspectives - Pestilence - Spheres platter, by the way are a bit "wicked", to say at least, not many clear melody runs.